Israel is experiencing what local tourism experts are calling an unprecedented boom in new luxury hotels. International luxury brands are making their first forays to the Holy Land. The Ritz-Carlton will open its first hotel in Israel in December in Herzliya; the Waldorf Astoria is under construction in Jerusalem, with a 2014 opening date; and the W will debut its first Israel property in 2015 in Jaffa, next door to Tel Aviv. 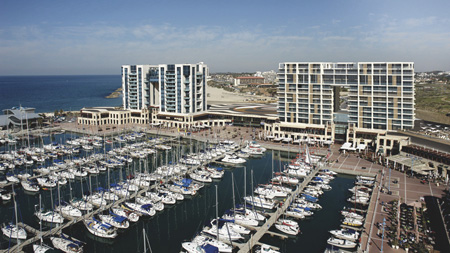 The appeal for these companies is the record number of visitors to Israel over the past half-decade that is increasing the demand for hotel rooms of all kinds, especially upscale ones. The addition of the Waldorf Astoria, Ritz-Carlton, and W Hotels reflects on the potential seen in developing Israel’s luxury travel market. But it started with the small, home-grown properties.

Isrotel, a locally based hotel chain, is a company that is both home-grown and big. The chain operates 17 hotels in Israel, nine of which are located in the Red Sea resort city of Eilat.

Its 23-story Royal Beach Tel Aviv opened on June 1 as the first newly built hotel on Tel Aviv’s iconic beach in 15 years. Later that month, the company’s 155-room Hotel Cramim opened on June 16 as a new spa hotel in the heart of the wine region of Judea, 15 minutes from Jerusalem.

The properties are the fourth and fifth members of Isrotel’s Exclusive Collection, a separate category designated for Isrotel’s five-star properties. They join the Royal Beach Eilat on the Red Sea, the Carmel Forest Spa Resort in Israel’s north and the Beresheet desert resort, on the edge of the Ramon Crater.
The new Royal Beach Tel Aviv offers a boutique hotel feeling but with all the facilities a larger property offers, such as a pool, spa, gym and business lounge.

Built among the monasteries, wineries and natural springs of the Jerusalem Hills, Isrotel’s Hotel Cramim is designed to be a destination for both spa and wine lovers; the spa’s signature treatments will use “vinotherapy” techniques, which incorporate wine and grape-based products. The hotel’s two-story spa has 23 treatment rooms, a solarium, saunas, Jacuzzis, and Turkish baths, with both indoor and outdoor pools.

The coming of the Ritz-Carlton, the Waldorf Astoria and the W properties to Israel is creating a lot of buzz within the travel community.

The Ritz-Carlton in Herzliya will have 115 rooms and suites, with their design inspired by the “marina lifestyle” on view from the balconies that overlook the largest marina in the country as well as Herzliya’s sandy beaches. The property will have a three-story spa as well as a rooftop bar and pool lounge that at night will serve cocktails and small bites. The hotel will become home to the first kosher Ritz-Carlton restaurant in the world, the Herbert Samuel.

The 220-room Waldorf Astoria Jerusalem was slated to open this year but is now accepting reservations starting in May. Steps away from the Old City, the hotel will open in a 1929-built structure that is undergoing an extensive renovation to restore intricate stone carvings and the decorative arches of its historical facade. The interior of the building is being completely rebuilt and will house three restaurants; a 5,380-square-foot spa and fitness facility with a pool; and expansive conference and meetings facilities.

Starwood Hotels & Resorts is opening its first W brand hotel in Israel in 2015, in a 19th century heritage building in Jaffa, the trendy and ancient port town next to Tel Aviv known for its bustling arts and culinary scene. The 125-room W Tel Aviv-Jaffa will offer panoramic views of the Mediterranean, a signature restaurant and destination bar as well as a spa, fitness center, an outdoor pool deck and a 24-hour business center.