December 9 Prime Minister of the Netherlands – Mark Rutte, who came to Israel with official visit, took a bike-ride in the central part of Tel Aviv.
Rutte and the accompanying members of the Dutch delegation took the bike from the “Tel-O-Fun” Company, which rents out bikes by using self-service stations located in different parts of the city. 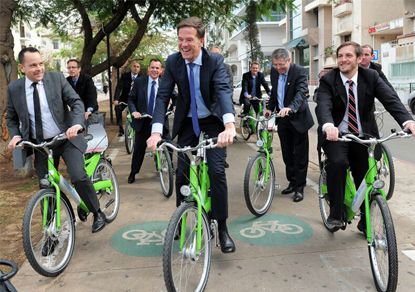 During the trip Mark Rutte was accompanied by representatives of the Tel Aviv municipality that show him the city’s sights. The route passed on Rothschild Boulevard and Dizengoff street, and ended near “Migdal Ha – Shalom” building.

“Tel Aviv is a lovely city – said Mark Rutte during the trip. – Here I saw an organic mix of people, atmosphere and the sea.” He wished the city administration active introducing the bicycle transportation in life – and then, on his opinion , ” this beautiful city will be even more beautiful”.