The opening of Waldorf Astoria Hotel in Jerusalem

One of the long-awaited highlights in Jerusalem, the opening of Waldorf Astoria in Jerusalem. Waldorf Astoria hotels around the world are synonymous with grand architecture, sumptuous interiors and the finest luxury facilities. The Waldorf Astoria Jerusalem towers impressively over the intersection of famous King David and Agron Streets and upscale Mamilla Mall. 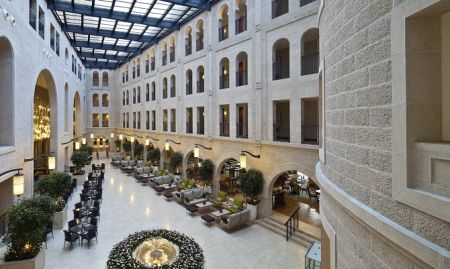 The hotel is a few minute walk to both Jaffa Gate of the Old City and the restaurants and bars of Jerusalem’s downtown district. The building stands out for its striking Greco-Roman, Gothic and Ottoman architecture and its expertly preserved 80-year-old exterior facade.

The Waldorf Astoria Jerusalem hotel offers 226 magnificent rooms including 33 suites and 2 presidential suites. Hotel facilities are spread over ten floors and feature 3 restaurants and a roof terrace lounge, the most modern fitness facilities, a full-service spa and a health club including two indoor pools, sauna and steam room. The hotel will make an obvious choice for major events with 8 state-of-the-art meeting rooms and a conference center as well as the Palace Grand Ballroom that will seat up to 708 people for a sit-down banquet dinner.