The Red Sea Jazz Festival will take place in Eilat between August 18 and August 21. It has a long, rich history – for 27 years it attracts Jazz fans from all over Israel and the world. These fans come to hear the best performers, living legends in the world of Jazz and young musicians destined to become tomorrow’s stars. The Red Sea Jazz Festival showcases a broad spectrum of jazz music and a wide range of artists. Among the participating international stars this year are Al Foster Quartet, Branford Marsalis Quartet and Brazilian singer Jo?o Bosco. 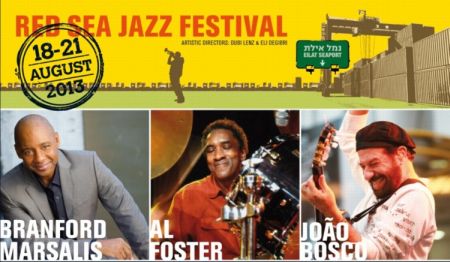 American jazz drummer and personality Al Foster is the only musician to have played with Miles Davis both in his funk fusion group in the 1970s and during his comeback in 1981. His versatile style of jazz to bebop to rock made him an integral part of the ensembles of Sonny Rollins, Herbie Hancock, McCoy Tyner and Joe Henderson.

American saxophonist, composer and bandleader Branford Marsalis is considered one of the most esteemed instrumentalists of his time. The three-time Grammy winner and Tony award nominee today Marsalis is the leader of one of the most renowned jazz quartets around.

Among the local talents are Avishai Cohen, another featured trumpeter, backed by a double-bass and drums, and Tatran, a trio of 20-something Israelis playing instrumental music that ranges from modern jazz to electronic to classical. Israeli singing star Ahinoam Nini will also be treating festival-goers to a special concert.

The launch of the Festival will be at Eilat’s Dekel Beach. The concerts begin in evening and last until the middle of the night.

As for accommodation, Eilat is a resort city and it has a lot of hotels, from luxury ones to more modest affairs. Another option is to avoid the hotels entirely and take advantage of the “Festival Village”. This campground at Dekel Beach itself will include accommodation for young people and families for a symbolic price, food and beverages, and riveting nightly shows.

For information and reservations redseajazzeilat.com